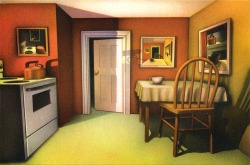 Janet Ballweg’s 4-color polymer plate intaglio prints show scenes of domestic interiors, filled with teacups and teapots and their lifelike shadows, that appear superficially calm but reverberate with a mysterious tension. Common everyday objects communicate a sense of waiting and wanting and a mixture of hope and despair; they speak about the expectations, the potential, and the psychological tensions that exist within a particularly decisive moment in time. 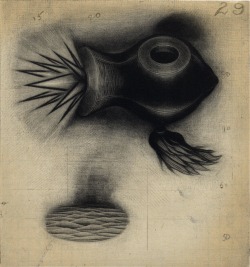 Sean Caulfield’s velvety etchings and mezzotint prints allude to a multiple of references in classical mythology, literature, and scientific and medical illustration. The imagined landscapes are populated by enigmatic objects that refer to both mechanistic and naturalistic forms, and the images explore themes of mutation, and metamorphosis. 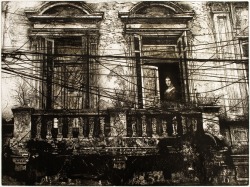 Michael Goro’s dramatic intaglio prints experiment with the familiar: simple things that are seen every day and things that develop a richer symbolic meaning once they are taken out of context. The work shows a startling juxtaposition of places, faces, and architectural designs that encapsulate a feeling of deconstruction, discontinuity, and dislocation. 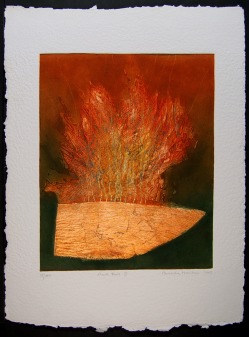 After winning 2 Arts council awards, in New Zealand (painting) and the UK (Theatre design) Brenda Hartill became a printmaker, publishing her own collagraphs and etchings from her London studio for 30 years.  She shows in over 40 galleries world-wide, and has her work in many public collections. She is a member of the Royal Society of Painter Printmakers (RE), and shows regularly at the Bankside and the New Academy Galleries, London. She published a book ”Collagraph and Mixed-media Printmaking” in 2004.

Brenda Hartill’s opulent collographs and etchings explore the texture, pattern and light of the organic landscape: the strong light and shade of Southern Europe, the gentler greyness of light in the UK and the mountains of remote New Zealand where she spent time as a child. Her abstract imagery alludes to rugged mountain erosion, landscape structure and the dynamics of plant growth. 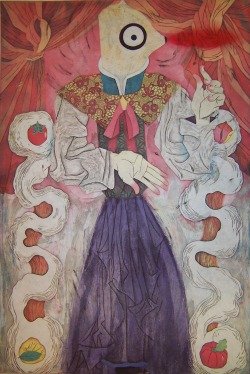 Yuji Hiratsuka was born in Osaka, Japan. In 1973 until 1978 he studied at Tokyo Gakugei University, Koganei-shi, Tokyo, Japan. In 1978 he graduated with a BS (Batchelor of Science) in Art Education.

In 1985 the young artist, then 33 years old, decided to take a plane in Eastern direction, and moved to the United States. Hiratsuka has not been the first one to make this step. Many Japanese artists of the 20th century went to the United States - some for studies, others for teaching. Some remained only one or two years in the U.S.A. and others forever.

In 1987 Hiratsuka began to work as an art instructor. Since 1992 he is an Associate Professor at the Department of Art, Oregon State University in Corvallis. 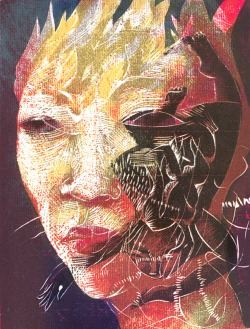 Wuon-Gean Ho has held print residencies in Kyoto, Japan; Caldera; Crows’ Shadow Institute of the Arts; and the Sitka Center for Arts and Ecology, all in the US; and at Intaglio Printmaker, and Printspace, in the UK. She was awarded the Monbukagakusho scholarship to study printmaking from 1998-2000, and has been the recipient of the John Purcell Paper prize in 2007 and Printmakers’ council prize in 2009.

Wuon-Gean Ho’s silkscreen prints deal with the notion that people as individuals have true histories, memories and expectations hidden beneath the face or mask that is shown to the world. The prints combine narrative with symbolic allusions, and the female faces display a tapestry of stories on the surface of the skin as tattooed-like markings and ambiguous shadows.

Congratulations! 60 International Artists have work in this show